Although I was an early adopter of Pinterest, I confess that it took me a while to understand it. I set up an account sometime in mid-2011 after Jens P. Berget at Sly Marketing mentioned it in one of his newsletters. And then I  did nothing with it for about 6 months, because I didn’t really see it’s appeal.

I don’t recall why I reconnected with Pinterest, but as more people were using it and I saw their images, I began to understand it better. Initially it appealed to the part of me that likes to look through well-designed magazines: I found the images engaging and relaxing.

Years ago I had started to create scrapbooks of magazine pictures that appealed to me (a project that was recommended by one of the creative journaling books I was reading) — eventually those scrapbooks gathered dust with a pile of images that I didn’t have the time to paste into the books. And finally I just threw them out. So Pinterest started as a virtual version of those scrapbooks for me. Then I began to see posts from people like Beth Kanter, who in January 2011 wrote about using Pinterest as a curation tool  and that non-profits were using it to promote their organizations and engage their communities. My understanding of Pinterest matured and I began to see more options for using it in other ways, for example, the Social Work Apps Pinterest board maintained by Dorlee M and me and the Visions of Social Work board that both promotes the profession and highlights some aspects of our school. In his recent Wired article, In Defense of Pinterest, Clive Thompson describes how a therapist used Pinterest to help her clients communicate their moods when words just wouldn’t work.
END_OF_DOCUMENT_TOKEN_TO_BE_REPLACED

A Wired magazine article recently declared that the World Wide Web (WWW) is dead, noting a significant decline in the last decade in the proportion of Internet traffic that is browser-based. Surfing web sites reflects only a quarter of our Internet use now; the authors report that we are increasingly using of a multitude of apps over the Internet in place of the Web: Skype, video streaming through Netflix, email, file transfers, corporate VPN connections, online 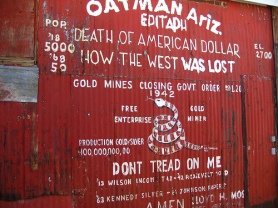 The End of the Wild West

In some ways, the demise of the Web feels like a loss of our wide open spaces, like the end of the Wild West and Westward Expansion in U.S. history.  Instead we are moving to an increasingly segmented (and organized) Internet world, one where you need to join a service, get the correct app, and, often, pay the fee. This specialization and the accompanying fragmentation are not new–it’s part of what happened with television when we moved from having a few shared broadcasting networks to the hundreds that are available through cable television. When this change happened with television in the United States what we lost was a shared dialogue space–a media town square, so to speak. Instead of having 3-4 main places that everyone watched and heard, we now have hundreds, with few (if any–Lost? American Idol?) rising to the level of a shared national focus. The positive side of this change was the increased diversity in what was available (although I still can’t find much I want to watch). The down side is that many of us stopped talking to anyone who was different–we started talking and listening to only those who reinforced our world view. The only time we have a shared focus now is when disaster strikes.

Where Do We Come Together?

I’m not sure that the WWW has ever given us what those 3-4 TV stations gave us: a place for us to listen and hear as one nation. And I know that those 3-4 stations didn’t speak for everyone–they didn’t really promote true dialogues across difference. But I do know that sometimes those dialogues occurred in the wide open spaces of the Web–sometimes we meet and interact with people who are different (in ways other than flame wars). So as the wide open spaces of the Internet decline, I wonder where our open communities will be. Right now, social networks like Facebook, Twitter, and YouTube have become some of the biggest spaces that are available to us. However, all of them allow us to customize what comes our way–the advantage of push technology. And of course, this same feature supports us talking with and listening to only what fits our reality. Sometimes there is content that crosses boundaries (goes viral). But most of the time most of us are talking and listening to those who think like us.

As a social worker I know that diversity doesn’t have to divide–it can make us stronger. But for that to happen people need to communicate, understand, respect and learn from our differences. The decline of wide open spaces can decrease the likelihood that we will encounter difference–perhaps what we have lost here is the idea that such places can exist, for they didn’t happen often.  But I don’t think the non-WWW Internet precludes having places to encounter and dialogue across differences; however, it will require that we plan, create, and then disseminate information about such spaces. And to do so requires that we deeply understand these new environments. The community organizers of the present–and the future–need to be able to work in virtual spaces as effectively as they do in neighborhoods and other types of real-world communities. While there are some amazing people are doing that now, I also know that many are still very uninformed about virtual environments, let alone familiar with how to build communities there. The descent of the World Wide Web is a call to action: to work together to create new open virtual spaces–perhaps they will be less wild, but they could still go a long way toward bringing diverse people together.